Rancho Santa Margarita, CA  - According to the Irvine Police Department (IPD) In the early morning hours of Oct. 11, an Irvine resident saw two suspects around his car, parked on Freemont Street, outside of his home. The resident went outside to confront the suspects, and was able to detain Mohamad Jamal Elmasri until Irvine Police Officers arrived. The other suspect identified as Omar Elnaggar,  was able to flee the scene but was detained later that day after appearing in court on residential burglary charges.

Both suspects are now in custody:  Mohamad Jamal Elmasri, 19, of Irvine was arrested on Tuesday, Oct. 11, following the theft on Fremont Street in Irvine. Omar Elnaggar, 22, of Irvine was detained a short time later.

Elnaggar and Elmasri have previously been arrested for residential burglary, theft from a vehicle and receiving stolen property.

Anyone with information on this case or these suspects is asked to contact IPD Detective Chris Bees at 949-724-7249 orcbees@cityofirvine.org.

Rancho Santa Margarita, CA - The flood of recent email leaks is proof positive of what independent minded voters already knew:  1)  News outlets like the Los Angeles times, The New York Times, ABC, CBS, NBC and the Clinton News Network (CNN) have long stopped being part of the Fourth State and have become members of a Clinton Basket, we refer o as Clinton Redeemables.

3)  That not unlike Obama, Hilary views Christians as Deplorables.

In summary, the facts show that Hilary categorizes voters into Deplorables and Redeemables:  The Redeemables include the LGBT community, Muslims, Radical Muslims, Atheists, Elitists, Sexcual Predators an Elitists. The Deplorables basket contain Christians, Jews, Latinos, Second Amendment defenders and all those opposed to the progressive agenda.

That in itself makes Hilary a Basket Case

How long does it take to close an Earthlink Account?

Rancho Santa Margarita, CA - So how long does it take to close an Earthlink account?  If you are lucky, one year.  After enduring more than 16 years with Earthlink, I finally decided to switch service providers more than a year ago.  The main reason for switching service providers was customer care.  Every single time I called technical support, I was read a list of things to do, none of which solved my problem.  I then had to research the problem and solve it on my own. 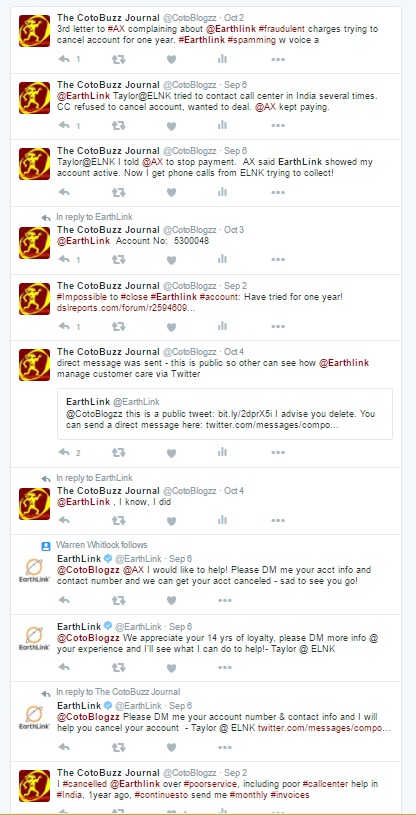 Roughly a year ago, I called Earthlink to have my service cancelled.  As in the past, I got through a call center most likely in India, as in the past.  The environment was too loud coupled with the accent, made it difficult to communicate, so the operation had to be repeated a couple of times.  What was clear, is that the agent did not want me to close the account.  He offered special discounts and bonuses if I kept the account open.  I told the agent that this was too late, as I already had the new service provider on line.

After repeated calls, one line items was closed in December of 2015.  Since then, Earthlink kept invoicing me for the second line item.

After three letters to American Express and a Twitter rant, magically the account seems to have been close as of this Monday.  Almost a year to the date since I commenced the cancellation process.

Interestingly enough, Consumer Affairs gives Earthlink one out of five stars based on customer complaint, while another website in its Earthlink Complaints & Reviews shows similar results
Posted by JLA at 11:55 PM No comments: