RANCHO SANTA MARGARITA, Calif. –  According to the OCSD, Orange County Sheriff’s Department deputies on Thursday, April 20, arrested a man suspected of vandalizing more than 20 vehicles over a five-month period in various locations in Rancho Santa Margarita. 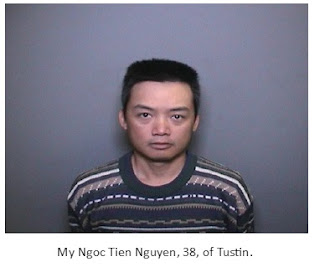 The first reported incidents occurred in late 2016 but an increase in the frequency and severity of the vandalism prompted Sheriff’s investigators to launch a dedicated, comprehensive investigation utilizing multiple resources to identify a suspect.

Nguyen was booked on suspicion of multiple misdemeanor and felony counts of vandalism. He is being held in lieu of $100,000 bail.
Posted by JLA at 2:22 PM No comments:

After the Syria Strikes and before Secretary of State Rex Tillerson goes to Russia, the story has changed:  Now, it is Trump aides taking a tough stand on Russia despite Trump.

In other words, if things are bad, according to the MSM, it is Trump's fault.  But if it is good, it must be  because Trump aides are saving his bacon.  Seriously?

HINT:  In order to be confirmed, judge Gorsuch did not have to learn to say nothing.  Putting it on the judge is nothing short of shameful.

The fact is that had it not been for Majority Leader Mitch McConnell, judge Gorsuch would not have been confirmed, and Chuck Schumer et all would have filibuster Gandhi, Nelson Mandela or even Jesus, if any one of them had been nominated instead of judge Gorsuch


In the piece titled,  He lobbied for gay rights and opposed Trump — now Seattle’s mayor is accused of sexually assaulting minors: https://www.washingtonpost.com/news/the-fix/wp/2017/04/08/he-lobbied-for-gay-rights-and-opposed-trump-now-seattles-mayor-is-accused-of-sexually-assaulting-minors/ The Washington Post is clearly using association fallacy or as I refer to subliminal propaganda to blame president Trump for  Seattle Mayor Ed Murray proclivities

The piece includes the following line:  This year, Murray became a leading voice in the West coast resistance to Trump's agenda — particularly the president's promise to target undocumented immigrants.  The conclusion:  Of course, it must be president Trump who is coming after Seattle Mayor Ed Murray – Murray is the victim in this case.

Shameful!
Posted by JLA at 4:42 PM No comments:

The Art of The Deal: - Apologies to President Trump

President Trump invites China President Xi Jinping for dinner  at Mar-a-Lago,  the Winter White House and away from Obama-loyalists in DC who may continue to spy on him.

During dinner, President Trump asks president Jinping for help with North Korea: “You gotta help me out here with the North Korea issue” President trump says.

“You know I have done all I can, but that crazy guy just goes ballistic without notice, I don’t think I can do anything else” responds President Jinping.

“I just bombed the hell out of Syria, but that is just a warning.  If Assad does not get the message, guess what I am going to do next” says President Trump.  Then he asks “Where were we?”

President Jinping says:  “we were talking about North Korea, and all the things I am going to do to that crazy guy if he does not control himself” – I”ll keep you posted, he adds.
Posted by JLA at 4:18 PM No comments: