Sunny Jewel and Ocean Coral were the perfect team for the better of four months, giving birth to four baby parakeets in December, during the worst weather of the year.

Prior to giving birth, their environment consisted of two warming nests, a heated perch. At night, the cage was covered with blankets and a portable heater would turn on. The heater is on a tomer placed under a table where which holds the cage.

Sunny & Ocean chose the biggest warming nest to take care of the fertilized eggs. In early December we could could hear chirping, indicating live chick.

Eexperts" say baby parakeets poop in their own fecal sacs, which a parent is supposed to dispose of and to avoid touching the eggs or baby birds, we let Sunny & Ocean do all the parenting.


But finally on December 31, they became so overwhelmed, they cried for help. As I got ready to go on a walk, Sunny & Ocean were crying out for help. My wife stopped me on my tracks and said "the birds are calling you" - indeed, as I made a U turn, I could see two dead chicks. On closer look I saw Hot Tamale & Salty Seawood still alive but caught on the grill of the cage. 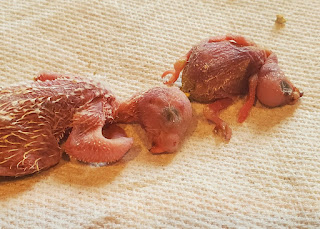 I insulated the cage, took down the backed up warming nest & turned on a heater. Not withstanding problems trying to control the ambient temperature inside the cage, both survivors seemed to have dodged a bullet: My wife & I slept on the sofa so we could fed the birds every two hours.

By January 2 even though the temperature inside the cage had dropped to less than 73 degrees, both seemed to be OK. As the older chick, Salty would be always embracing the younger Hot Tamale.

On January 3 morning Salty was stiff, cold, not chirping and barely breeding. By 7:30 am, I declared her dead. As I planned her burial, I held her on my hand I held her breathing on her for a couple of hours - then a miracle happened! She snapped back hungry, leaving poop in my hand! The good news was that the poop color & consistency indicated she was well.

By January 4th, things seemed bright for Salty:  I had already received a scale  and baby formula. By 10 pm she weighed a high 54 oz and she slept outside the cage in a thermal carrier
She started taking the baby formula, which she didn't like - It had a fishy odor, so she only got a couple of nibbles and went back to sugar water & diluted apple juice.
By January 5th at 10:00 am Salty had dropped to 46 Oz.  By 2:30 feeding, she had no appetite & her green poop indicated either lack of nutrition or stress. 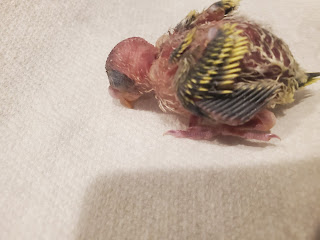 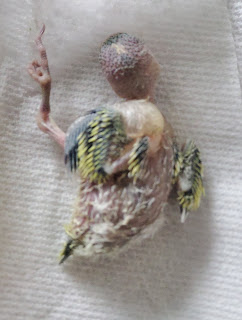