The Catholic Media's War On the Pope Continues

The Catholic Media's war on Pope Francis continues. The piece titled Vatican Inconsistencies: A Tale of Two Bishops By Edward Pentin is an example: The piece is hardly news worthy. It is not breaking news, Simply recycled news to make sure its readers discontent with Pope Francis is top of mind. Perhaps they missed Matt 12:25 "Knowing their thoughts, he said to them, “Every kingdom divided against itself is laid Thwaste, and no city or house divided against itself will stand." They complain about what he does, what he does not do, what he says & what he fails to say:  They have a "better" slate of Cardinals-designates than the ones Pope Francis chose.  They dislike that Pope Francis did not spike the ball when SCOTUS overturned Roe V Wade, as it was an earthly victory like the Super Bowl. They dislike that Pope Francis offered communion to so-called devout Catholics Joseph Biden & Nancy Pelosi. They love to report on disobedient priests and hail them as heroes. 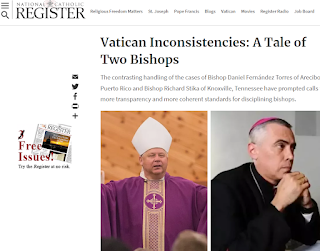 Throughout the New Testament stops the disciples to do certain things, such as in Acts 16:6 "Next Paul and Silas traveled through the area of Phrygia and Galatia, because the Holy Spirit had prevented them from preaching the word in the province of Asia at that time." Whereas in Matt 28:19 "Therefore go and make disciples of all nations, baptizing them in the name of the Father and of the Son and of the Holy Spirit. In other words, the Holy Spirit prevented them to do certain things or encouraged them to do certain things.  But the National Catholic Reporter (NCR)  even mocks Pope Francis when he admits he has made mistakes and asks for forgiveness, NCR claims a higher moral ground than the Holy Father.

The Catholic Media covers the Vatican as if it was a secular organization, perhaps ruled by a military junta, or a corporation ruled by a CEO and a board of directors. To say that the Catholic Media dies not like Pope Francis, is an understatement.  They have called for his resignation and they can't wait to see it happen.  Apparently they do not believe the Holy Spirit guides the Vatican

Like Big Tech, that monetizes hate and division, the Catholic Media seems to thrive in hate and division and disobedience.  They do not seem to recognize the concept of Papal Supremacy.  Papal supremacy is the doctrine of the Catholic Church that the Pope, by reason of his office as Vicar of Christ, the visible source and foundation of the unity both of the bishops and of the whole company of the faithful, and as pastor of the entire Catholic Church, has full, supreme, and universal power over the whole church, a power which he can always exercise unhindered: that, in brief, the Pope enjoys, by divine institution, supreme, full, immediate, and universal power in the care of souls.

The opposite of so many saints, including Saint Margaret Mary Alacoque.  As a youngster, Saint Margaret was sickly with painful home problems entering the Order of the Visitation nuns at the age of 24. A Visitation nun was “not to be extraordinary except by being ordinary,” but the young nun was not to enjoy this anonymity. A fellow novice characterized Margaret Mary humble, simple, and frank, but above all, kind and patient under sharp criticism and correction. She could not meditate in the formal way expected, though she tried her best to give up her “prayer of simplicity.” Slow, quiet, and clumsy, she was assigned to help an infirmarian who was a bundle of energy.  Like all saints, Margaret Mary had to pay for her gift of holiness. Some of her own sisters were hostile. Theologians who were called in declared her visions delusions and suggested that she eat more heartily. Later, parents of children she taught called her an impostor, an unorthodox innovator. A new confessor, the Jesuit Claude de la Colombière, recognized her genuineness and supported her. Against her great resistance, Christ called her to be a sacrificial victim for the shortcomings of her own sisters, and to make this known. After serving as novice mistress and assistant superior, Margaret Mary died at the age of 43, while being anointed. She said: “I need nothing but God, and to lose myself in the heart of Jesus.”  Antithetical to priests who cannot wait to go in front of the camera to criticize the Vatican: Matt 16:23 Jesus turned to Peter and said, “Get away from me, Satan! You are a dangerous trap to me. You are seeing things merely from a human point of view, not from God’s.”

Reminiscent of non Believers or those who left the Church, "because they are all hypocritical." Forgetting the obvious: Mark 2:17 "On hearing this, Jesus said to them, “It is not the healthy who need a doctor, but the sick. I have not come to call the righteous, but sinners.”" Even in Giovanni Boccacio's stories, Abraham a Jewish businessman converts to Catholicism after visiting Rome. He witnesses the corruption and concludes "that what these scoundrel clerics so zealously want never takes root." Therefore, Abraham concludes: "It is quite to me your Church must have the Holy Spirit for its foundation & support." Giovanni Boccaccio was an Italian writer, poet, correspondent of Petrarch, and an important Renaissance humanist and one of the most important figures in the European literary panorama of the fourteenth century. Some scholars define him as the greatest European prose writer of his time, a versatile writer who amalgamated different literary trends and genres, making them converge in original works, thanks to a creative activity exercised under the banner of experimentalism.

Acts 5:39 "But if it is from God, you will not be able to overthrow them. You may even find yourselves fighting against God!” Feels like the current Catholic Media is fighting God and fails to acknowledge the work of the Holy Spirit