Science Aint Closed - Whoever Claims it is, Dont Know Jack


The Center for Disease Control,s (CDC) Director Rochelle Walensky issues alert on Pfizer’s COVID-19 Pill, Paxlovid: ‘You Might Get Symptoms Again" Use of Pfizer's Paxlovid, authorized to treat newly infected, at-risk people in order to prevent severe illness, has soared as infections have risen. The Biden administration officials have pushed for wide use of Paxlovid, which the government purchased and provides free.
Earlier this month, the Department of Justice urged the US Supreme Court to reject a Bayer/Monsanto appeal of a California case and clear the way for potentially billions of dollars in lawsuits claiming that the weedkiller Roundup causes cancer.  Bayer/Monsanto is challenging a $25 million award to Edwin Hardeman, who says decades of exposure to Roundup caused his non-Hodgkin’s lymphoma. Bayer argues that federal approval of Roundup’s label meant Hardeman’s suit under California law-- and others like it -- couldn’t go forward.
Just as Bayer/Monsanto has reached an approximately $11 billion settlement with most plaintiffs. Approximately 80% of filed Roundup lawsuits have been settled. Some NHL victims received settlement checks in 2021 and 2022. Many others will receive their Roundup settlement money later this year as their Roundup settlement gets processed.
Recently over 1000 scientists wrote  A Scientific Dissent From Darwinism;" a simple, 32-word statement that reads: “We are skeptical of claims for the ability of random mutation and natural selection to account for the complexity of life. Careful examination of the evidence for Darwinian theory should be encouraged.” 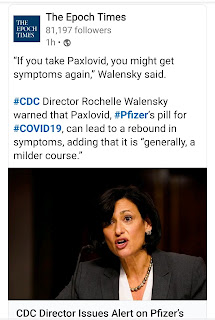 If 50 years after  DDT was banned, it's legacy is alive and teh CDC  is warning about Paxlovid, imagine what we are going to find out about COVID Vaccine side effects 10 years from now!