Updated with sample of Andrew Goldstein's work May 9, 2022

Last week, our oldest daughter invited us to mass today, the First Saturday of May held at The Chapel of  Mary, located in The National Sanctuary of our Sorrowful Mother, popularly known as The Grotto, a Catholic outdoor shrine and sanctuary located in the Madison South district of Portland, Oregon, United,  After mass, there was going to be a concert by some members of the choir from Saint Michael's Parish in Olympia, WA led by Andrew Goldstein, Steward for Music Ministry

As we are trying to get ready for Mothers Day, we reluctantly accepted and got reward bigly:  While we have been to mass at the Grotto several times, this time the church was overflowing, as it coincided with the anointing of the sick  The Anointing of the Sick is the sacrament in which the priest prays, lays hands and anoints the sick person with blessed oil in the name of the whole church. Anyone who is seriously ill due to sickness, injury or old age may be anointed. The sacrament is intended for serious mental or emotional illness as well. We were touched.

After mass, we were ready for the concert.  It did not start on a good note, as the sound system was not in working order. Undaunted, Andrew kicked it off playing the piano and singing with a voice that is a cross between Sergio Pereira, founding member of the Tenors, my favorite monk, John Michael Talbot

and gospel singer Michael W. Smith.  Saint Michael's website describes Andrew not as Music Director but as Steward for Music Ministry:  "Andrew helps people encounter Christ through sung prayer. He shepherds the gifts of volunteers in the adult choirs, children’s choirs, orchestra, and contemporary band, as well as provides support for concerts and other music-related events."

Such description reminded me of a conversation I recently had with my twin 9 year-old granddaughters. Because I usually stream Christian Music as we are driving, they asked why the genre.  My response was that such music is a form of prayer.  They nodded approvingly.  It turns out they also sing beautifully, as biased as I may be.  They are also in the church choir. 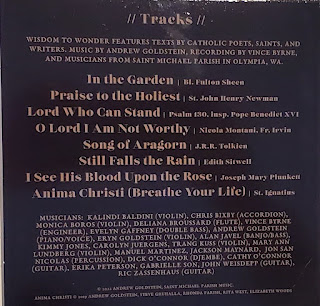 Needless to say, we were double blessed:  Attended a beautiful service and were treated to an outstanding free service.  We just had to get Andrew's by donation CD.  Life is good!  If you want to hear Andrew's music so we can compare notes, perhaps is best to contact him at the Parish.

As I followed up with Andrew, I became even more impressed with this young man: the following is a description of his CD: “Wisdom to Wonder” revives the depth of musical content in the Catholic Church by uniting today’s songwriters with yesterday’s saints, poets, and writers.  Throughout history, the Church has amassed profound texts by Catholic saints, poets, and writers. Past generations of composers would draw upon these texts to write hymnody (e.g. Louis Lambillotte’s (1796–1855) “Come Holy Ghost” draws upon writings of Archbishop Maurus (776-856)). Yet, despite modern abundance of literary sources, today’s Catholic songwriters have yet to mine this literature in a way that impacts the Church’s musical trajectory. “Wisdom to Wonder” was initiated by parish music director, Andrew Goldstein, in 2019. The pilot album released in January 2021, quoting text from: Bl. Fulton Sheen, St. Newman, St. Ignatius, poet Edith Sitwell, revolutionary Joseph Mary Plunkett, and JRR Tolkien. It was recorded live with the amazing support of volunteer musicians from Saint Michael Parish in Olympia, WA, alongside audio engineer Vince Byrne and videographers Dale Elliot and Rex Yabut.

And if you wish to check Andrews music using streaming services: