The Taliban of the USA Battles Elon Musk

We live in an age where people refuse to take responsibility for their own actions but demand apologies and  reparations for atrocities they never experienced, from people who never committed them. They like to cancel art, ideas, symbols, language & history they don't agree with - they even cancel names of military bases and main stream media celebrates.  Even CNN published an op-ed by Scott Jennings, June 24, 2021 titled Removing Teddy Roosevelt’s statue is the worst kind of pandering.  Jennings wrote “Monday’s decision by officials in New York City to remove the iconic equestrian statue of Teddy Roosevelt from the front of the American Museum of Natural History (the board of which called for its removal last year) is the worst kind of pandering. Getting rid of the Rough Rider does nothing to advance the cause of racial harmony, but it does serve the goals of those who believe America is an irredeemable, racist nation that must be torn down. When this national statue removal madness started, we were assured advocates were just after the Confederates. Why are we honoring traitors, they asked?’


The Intolerant of Tolerance Left – The Taliban of the West

Afghanistan, like many of today’s nations has been  melting pot of cultures that make up the colorfully robust and dynamic foundation of Afghanistan in general and art specifically,  These civilizations include, the empires and kingdoms like the  Achaemenid Empire, the Macedonian Empire, the Indian Maurya Empire, the Islamic Empire and the Sassanid Empire. Like the empires, Afghanistan's transient and nomadic kingdoms and dynasties that rose to power: Greco-Bactrians, Kushans, Hephthalites, Turk Shahis, Saffarids, Samanids, Ghaznavids, Ghurids, Kartids, Timurids, Mughals, Hotaki dynasty and Durrani dynasty. They helped shape the development of Afghan art as well as its preservation and destruction. Through 1992, Taliban attacks and looting of the National Museum of Afghanistan resulted in a loss of 70% of the 100,000 artifacts of Afghan culture and History. On orders from Taliban founder Mullah Omar, the  Buddhas of Bamiyan were destroyed in March 2001, after the Taliban government declared that they were idols.The Buddhas of Bamiyan were two 6th-century monumental statues carved into the side of a cliff in the Bamyan valley of Hazarajat region in central Afghanistan. Omar’s edict created a global uproar, including moderate Muslim clerics and heads of state who asked the Taliban to reverse coarse. UNESCO representatives argued for the need to preserve a cultural heritage and to respect religious tolerance. UNESCO, the MET in New York) and  some Buddhist states, such as Thailand, Sri Lanka, offered to buy the Buddhas. To make the destruction more dramatic, journalists were flown to Bamiyan on March 26 to see with their own eyes ground zero, where the statues had stood. Prior to that, on March 19, the Taliban had agreed for this one occasion to let Al-Jazeera cameramen witness the final phase of the demolition.

Sad, sad indeed.  The same people who mourned the death of the Buddhas and the destruction of artifacts of Afghan culture and History celebrated the removal of not only Confederate Leaders, but also Teddy Roosevelt.

The Taliban of the West’s War on Free Speech

Now the same people are mourning the sale of Twitter to Elon Musk. Writing for Fortune Magazine, Steve Mollman is among the mourners:  Musk has owned Twitter under a week and big names are already leaving the platform, complaining about a hate surge, and calling for tighter regulation "That didn’t take long. It’s been four days since Elon Musk finalized his $44 billion takeover of Twitter, and already he’s facing pushback from celebrities, lawmakers, and advertisers worried about how the 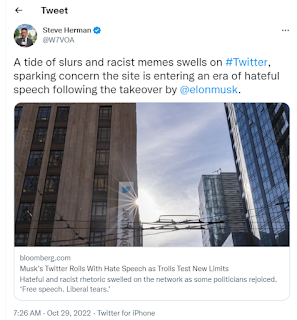 But we saw this movie before. Steve Herman tweeting for Bloomberg sounds a different alarm.  He tweets: “ A tide of slurs and racists memes swell on #Twitter, sparking concern, the site is entering an era of hateful speech following the takeover by @elonmusk.”  We actually found the opposite to be true: #LinkedIn #Instagram, #Facebook - even #Twitter et al have intensified their attack on free speech since Elon Musk bought Twitter.  Instagram uses USA Today to fact-check a prayer and agrees with Washington Post and NY Times:  Prayer may be hazardous to your health.

Meanwhile LinkedIn blocks me for posting fact-based information on COVID Vaccinbe,  its censors deem to be misleading. Yet, while Twitter has banned President Trumpand others for life, it continues to allow totalitarian regime representatives, such as Chinese Government Spokesperson Lijian Zhao @zlj517 even though he blamed the CIA for planting the COVID-19 virus! 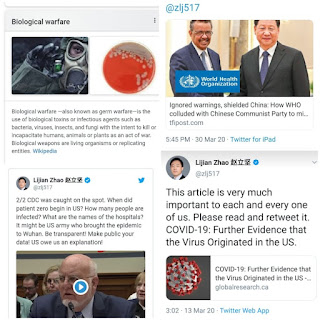 But we have seen this movie before. In April of this year, we thought Musk was undertaking a big challenge, something he recently acknowledge saying he was not doing it for the money or because it was easy, but because it was the right thing to do.  A rhteorhical question we asked at the time was:  Will Musk be able to put Twitter back together again?  Not according to Pew Research:  Big Tech monetizes hate & division.  Covertly leans ProChina & AntiUSA, its algorithms reflect such bias.  In short, Bigh Tech and Twitter are diametrically opposed to Musk’s desire for a free speech digital square free of bots & SNOs & open source algorithms.  According to Musk:  “Free speech is the bedrock of a functioning democracy, and Twitter is the digital town square where matters vital to the future of humanity are debated”


While not as consequential, Kanye West’s intention to buy the Social Media Platform Parler and President Trump’s Truth Social, with Twitter, make up what we dubbed the Trifecta of Social Media. This trifecta of social media accelerates the need to answer the questions we previously asked;

If the initial news that Elon Musk had offered to buy Twitter sent mainstream media, Big Tech, China, the DNC et al in a tailspin, how will they react to the Trifecta?

Will Columbia University and the Pulitzer Prize Board, stop giving Pulitzers for Fake News, like they did when they gave Pulitzers to the Washington Post and the New York Times for the Russian Hoax?