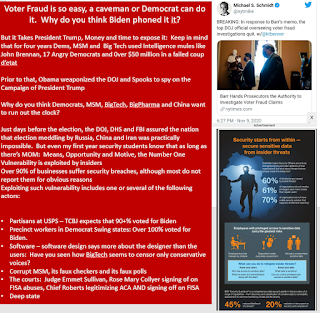 In that capacity, these AUSAs are responsible for overseeing their Districts’ handling of election day complaints of voting rights concerns, threats of violence to election officials or staff, and election fraud, in consultation with Justice Department Headquarters in Washington.

While The CotoBuzz Journal welcomes the DOJ's nationwide Election Day Program, TCBJ continues to urge DOJ/FBI to guard against the Inside Threat, which by our estimation is a higher risk vulnerability. Insiders include The United Postal Service Workers, IT workers, Electoral Registration Forms Officials, and so on. If not monitored properly, can create the most damage. We also urge the DOJ to  adopt a new security paradigm:  The Higher the Trust Level, The Lower the Trust - in this case. The AUSAs work would be closely scrutinized