To say that the Reservation System allowed indigenous people to govern themselves and to maintain some of their cultural and social traditions. Originally created to keep Native Americans off of lands that newly arrived European Americans wished to settle has been a total failure is an understatement. The United Nations defines human rights as  "

rights as freedom of movement; equality before the law; the right to a fair trial and presumption of innocence; freedom of thought, conscience and religion; freedom of opinion and expression; peaceful assembly; freedom of association; participation in public affairs and elections; and protection of minority rights. It prohibits arbitrary deprivation of life; torture, cruel or degrading treatment or punishment; slavery and forced labor; arbitrary arrest or detention; arbitrary interference with privacy; war propaganda; discrimination; and advocacy of racial or religious hatred."

Yet, Native Americans and Alaska Natives have and continue to suffer human  rights abuses due to  progressive policies which can be aptly characterized as War on Minorities: WON, corrupt politicians and incompetent tribal leadership.  Prior to Dr, Faucci, U.S. government doctors thought it was fine to experiment on disabled people, prison inmates and minorities, such experiments as  giving hepatitis to mental patients, squirting a pandemic flu virus up the noses of prisoners in Maryland,  injecting cancer cells into chronically ill people at a New York hospital, sterilizing Native American women whiteout their consent and notably the Tuskegee trials where for r 40 years, the US Public Health Service (PHS) conducted an experiment on African Americans men who suffered from syphilis, lured them under the guise of free medical care and meals but withheld treatment

When was the last time you counted the number of local, state & federal bureaucracies designed to help Native Americans? By my count, these are in the thousands. And how successful are they at managing taxpayer money in the name of helping  Native Americans? Look at the data:  On June 13, 2014, President Obama visited  the Standing Rock Sioux Tribe in North Dakota to highlight the challenges Native Americans face. In an op-ed in Indian Country Today, Obama called the poverty and high school dropout rates among Native Americans a moral call to action. Not to mention alcohol and drug abuse. While reservations vary drastically in size, population, political economy, culture and traditions,  all reservations face similar challenges: Native Americans account for only a small part of the U.S. population but they experience much higher rates of substance abuse compared to other racial and ethnic groups.  Then there's the general despair due to poverty and  lack of opportunity for the young ones.  The data clearly shows that the Native American and Alaska Native bureaucracies  have been a complete failure - not unlike most bureaucracies. 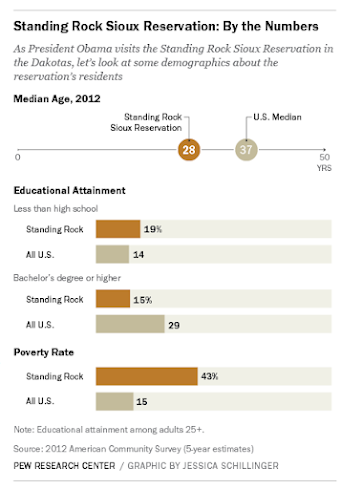 When presidential candidate Mitt Romney endorsed a proposal to eliminate major federal assistance programs for low-income Americans and turn them over to the states, The Center On Budget and Policy Priorities immediately  took Romney to task. writing"  the rationale he offered for doing so in this past Sunday’s “Meet the Press” debate — that the federal bureaucracy eats up most of the money Congress provides for these programs, and little actually reaches people in need — is simply false.  At least nine-tenths of federal spending for each of these programs (and in most cases, a higher percentage) reaches low-income Americans' - The fact of the matter is that anyone who owns the chart of accounts can make a P & L Statement read like a P or a L.  Putting that aside for a while, all government programs designed to help low income Americans by come with tons of red tape, which only the well-connected can navigate, are prone to political manipulations or as Lois G. Lerner, the IRS official who oversaw the IRS abuses targeting conservative groups, said the actions were  absolutely inappropriate by front-line people were not driven by partisan motives.. Ken Poirot observed that  "Wherever there is power, greed, and money, there is corruption," while  Timothy 1:10 says "For the love of money is the root of all evils, and some people in their desire for it have strayed from the faith and have pierced themselves with many pains."

Forbes' Simon Constable says that "there's too much misinformation about the U.S. government's food stamp scheme. So after some investigation, here are some facts about the benefit, also known as the Supplemental Nutrition Assistance Program (SNAP)" and goes on to detail fraud as he sees it, where USDA defines USDA fraud  as" the exchange of benefits for cash or other ineligible items (trafficking) or purposefully misrepresenting information on your SNAP application in order to receive benefits that you are not entitled to or more benefits than you are entitled to receive."

Many progressive solutions have been offered,  such as the one by the Center for American Progress,  In a classic misapplication of the theory of allocation, CAP writes that "American Indian and Alaska Native women in the United States make just 60 cents for every dollar earned by their white male counterparts, and this wage gap forces too many of them and their families into poverty." its akin to saying that if you mix apples and pineapples you could get crabapples:  A 5%, 25%, 50% or 100% pay raise has not changed anyone's lifestyle. To end alcoholism in reservations, USA Today's Naomi Schaefer Riley suggests a much more proactive tribal leadership

To really address the poverty, drug and alcohol abuse in the Native American and Alaska Natives, a new paradigm is required.  Building casinos as a way out is like serving alcohol in an Alcoholic, Anonymous meeting. You could throw away all the bureaucracies designed to help the Indigenous population and they would not fare any worse.  The only ones who would be hurt would be tribal leaders, bureaucrats and corrupt politicians - here are some thoughts

1.  Abolish all bureaucracies designed to help Indigenous people and use the funds to set up high speed networks  and free computing devices for each family in the tribe, as in home office, call-center ready

2. Incentive businesses to train and hire Indigenous people. COVID has shown us that working remotely is possible - businesses do not need buildings in or near the reservations

3.  Set up trade schools online, near or in the reservations

4.  Stop all new construction of casinos

5.  Avoid the one million dollar executive to take care of the homeless. Let Catholic faith based
organizations help out with education, alcohol and drugs abuse. There are plenty of such groups already doing that job like: Sister Chato, a Navajo woman and member of the Sisters of the Blessed Sacrament, who works in the Diocese of Gallup serving the largest Native American reservation in the United States is Navajo Nation,  covering  northeastern Arizona and northwestern New Mexico, as well as parts of Utah.  There is  Sister Margaret Hillary, OP who has served the community on the Flathead Indian Reservation in Montana and The Sisters on the Frontlines. Sisters on the Frontline are prophetic witnesses and voices of hope. They are close to those who are in need and they are trusted by people of all walks of life

More politicians looking for photo opportunities is no longer acceptable.  More bureaucracies is not acceptable.  A paradigm change is required to end the misery and human rights abuses in the Res.