Pfizer Tweet to reassure its customers has the opposite effect

Pfizer uses a piece in IFLScience titled Working At The Speed Of Science And Why You Should Be Excited, by Dr. Beccy Corkill to apparently put Pfizer's customers' minds at ease.  Dr. Corkill uses the Doubling of Knowledge Curve to explain why medical breakthroughs are possible

Has the opposite effect 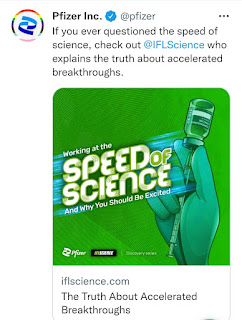 Its as convincing as  Bernay's Eat Bacon Campaign:  Bernay used the agency’s internal doctor and asked him whether a heavier breakfast might be more beneficial for the American public. Surprise, the doctor confirmed Bernays suspicion and wrote to five thousand of his doctors friends asking them to confirm it as well. This ‘study’ of doctors encouraging the American public to eat a heavier breakfast – namely ‘Bacon and Eggs’ – was published in major newspapers and magazines of the time to great success. Bernay's  profits rose sharply thanks to Bernays and his team of medical professionals.
Posted by JLA at 4:53 PM