Poison was not involved, domestic terrorism, bribery, corruption, and abuse of power not involved either. Last year  Alexei Navalny was sentenced during a hearing in Moscow after being charged with violating his probation by travelling to Germany for life-saving treatment and was sentenced to two and a half years in prison, having already spent one year under house arrest, then police beat and arrested protesters who came out to support Navalny.  Meanwhile Chinese President Xi Jinping's biggest rival at one time, Sun Zhengcai, was just sentenced to life in prison.Zhengcai, the former Communist Party secretary for the city of Chongqing, was found guilty on of taking $26.7 million in bribes. He was given a life sentence and all his personal property and "illegal gains" will be confiscated. Sun is the most senior leader to be caught up in Xi's anti-corruption crackdown which has focused on bribery and misuse of public funds, but it has also drawn criticism for its focus on Xi's political enemies.  Then there is the outrageous case of the abuse of human rights, as the Hugo Chávez regime in Venezuela  arrested anti-communist activist Alejandro Peña Esclusa on trumped-up charges of being a terrorist. The president of UnoAmerica, an anti-communist alliance, and the author of The Foro de São Paulo: A Threat to Freedom in Latin America, Peña Esclusa is a former Venezuelan presidential candidate who has opposed efforts by the Chavez regime to spread Marxist revolution in Venezuela and throughout the region. 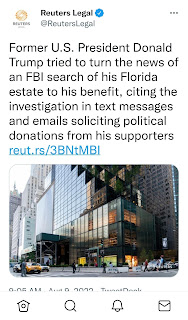 Much More consequential is Department of Justice sending the FBI last night to raid former President Trump’s private home in Florida:  This is just what authoritarian regimes do.  This day will live in Infamy. The "Day of Infamy" speech was delivered by Franklin D. Roosevelt, the 32nd president of the United States, to a joint session of Congress on December 8, 1941. The previous day, the Empire of Japan attacked the United States military bases at the Pearl Harbor, Hawaii, and the Philippines, and declared war on the United States and the British Empire. Yesterday's DOJ attack on a political opponent is an existential threat to the United States of America.  Yet Reuters Legal minimizes the even as merely a fund raising ruse! NY Times Charlie Savage fantasized about banning President Trump from ever holding office.  They framed President Trump with a Russian Hoax aided by 17 Intelligence Agencies, but they are not giving up.  The want to cancel the Trump Family 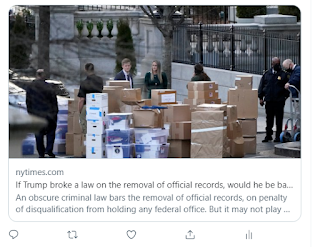 And CNN minimizes the even as simply a partisan issue: "Top congressional Republicans are rushing to former President Donald Trump's defense after the FBI executed a search warrant at his Mar-a-Lago resort in Florida as part of an investigation into the handling of potentially classified material."  It is not!  It is an attack on the United States of America by an out of control bureaucracy that just last week characterized patriotic symbols as symptomatic of domestic terrorism. 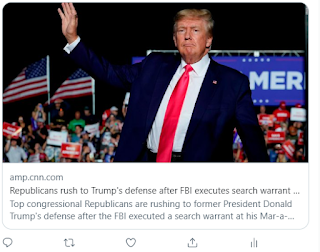 Even Speaker of the House Nancy Pelosi, when asked about the DOJ comes up with a vacuous, "no one is above the law" response.  The good news is that Former Democratic presidential candidate Andrew Yang, tweeted: “This raid strengthens that case for millions of Americans who will see this as unjust persecution.” Former former NY Governor Andrew Cuomo opined: “DOJ must immediately explain the reason for its raid…and it must be more than a search for inconsequential archives or it will be viewed as a political tactic and undermine any future credible investigation & legitimacy of January 6 investigations.”

As of this moment, the Department of Justice has yet to explain why they raided Trump’s home. Asked today, the White House press secretary said President Biden had no advance notice of the raid and learned about it from the news like everyone else. There are some so-called journalists speculating that the raid may be related to President Trump or his aides holding on to classified documents.  Get it? Louis Keene even defends Judge Bruce Reinhart, a former prosecutor who as been criticized for representing former employees of Jeffrey Epstein related to his sex-trafficking scandal tries to connect the judge as being on  the board of a South Florida synagogue.  As if  that was some sort of absolution,  The Day will live in Infamy and any Journalistic Integrity left has been drained.