The FBI's Director Wray submitted a 42,000+ word statement Thursday to the Senate Judiciary Committee holding up the exemplary work the Bureau is doing addressing its top priorities, which the Federalist's Jordan Boyd  characterizes as  FBI Director Sets New Record For Lies, Dodges, And Obfuscations To Avoid Slight Attempts At Congressional Oversight:  FBI Director Christopher Wray refused to answer legislators’ questions about his agency’s history of corruption and cover-ups and instead doubled down on defending the FBI’s actions against U.S. citizens during a Senate Judiciary hearing on Thursday. Senators on both sides of the aisle explained their frustrations with the FBI’s lack of transparency and response to their various letters inquiring about threats around the country. “There is the perception that there are two tiers of justice: one for people that are favored and one for ordinary Americans,” Sen. Marsha Blackburn noted during her interrogation
This piece, an overview includes Wray's commissions and omissions.  The FBI Priorities are to protect the United States from terrorist attacks, Protect the United States against foreign intelligence operations, espionage, and cyber operations, Combat significant cyber criminal activity, Combat public corruption at all levels, Protect civil rights, Combat transnational criminal enterprises, Combat major white-collar crime, Combat significant violent crime
As for terrorism, Wray discussed both domestic and international terrorism, and characterized them both as evolving, According to Wray's statement, the top domestic terrorism threat the FBI categorizes as racially or ethnically motivated violent extremists, including those who advocate for the superiority of the white race, who were the primary source of lethal attacks in recent years."
And added that "It is important to note that we have also recently seen an increase in fatal domestice violent attacks perpetrated by anti-government or anti-authority violent extremists, specifically militia violent extremists and anarchist violent extremists" and apparent reference to the January 6, 2020 Capitol breach.  Wray dismisses the riots, looting and violence across America, Mainstream Media characterizes as mostly peaceful protests by ANTIFA and Black Lives Matters 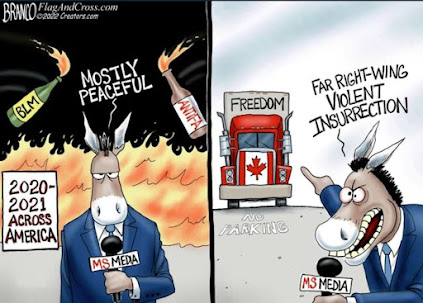 In discussing foreign terrorist organizations (FTO) Wray states that the Bureau " remains concerned that FTOs, such as ISIS and al-Qa’ida and their affiliates, intend to carry out or inspire large-scale attacks in the United States. Despite its loss of physical territory in Iraq and Syria, ISIS remains relentless in its campaign of violence against the United States and our partners—both here at home and overseas." And added that  Al-Qa’ida maintains its desire to both conduct and inspire large-scale, spectacular attacks, while "Iran and its global proxies and partners, including Iraqi Shia militant groups, continue to attack and plot against the United States and our allies throughout the Middle East in response to U.S. pressure" 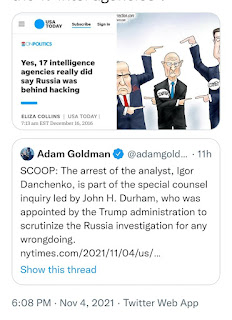 According to Wray, Iran’s Islamic Revolutionary Guard Corps-Qods Force (IRGC-QF) continues to provide support to militant resistance groups and terrorist organizations. Iran also continues to support Lebanese Hizballah and other terrorist groups. Hizballah has sent operatives to build terrorist infrastructures worldwide. The arrests of individuals in the United States allegedly linked to Hizballah’s main overseas terrorist arm, and their intelligence collection and procurement efforts, demonstrate Hizballah’s interest in long-term contingency planning activities here in the homeland. Hizballah Secretary-General Hassan Nasrallah also has threatened retaliation for the death of IRGC-QF Commander Qassem Soleimani. Wray 's statement did not mention  that Iran gave the White House a reason to abandon appeasement but still will not do i - when  the leaders of Iran’s Islamist regime  removed 27 cameras that were supposed to allow the International Atomic Energy Agency (IAEA) to monitor its nuclear program. or as Jonathan S Tobin might say:  Perhaps they meant it to test the mettle of the West and its willingness to hold them accountable for their behavior?  It could be one more bargaining trick they’ve pulled out of their sleeve as they wait patiently for the Biden administration to crack and offer more concessions in order to get Tehran to sign on to a new and even weaker nuclear deal than the bargain it struck in 2015 under the Obama administration.

Director Wray then went on to discus cyber threats and extol the work has been doing in the area: In total, the FBI took over 1,100 actions against cyber adversaries last year, to include arrests, criminal charges, convictions, dismantlements, and disruptions and enabled many more actions through our dedicated partnerships with the private sector, foreign partners, and with federal, state, and local entities. We also provided thousands of individualized threat warnings and disseminated more than 100 public threat advisories by way of Joint Cybersecurity Advisories, FBI Liaison Alert System (FLASH) reports, Private Industry Notifications (PINs), and Public Service Announcements (PSAs), many of which were jointly authored with other U.S. agencies and international partner.  Director Wray, did not discuss how the premier law enforcement in the world's email system was compromised by hackers who sent fake cyberattack alert

Wray discussed how the FBI following the 2018 midterm elections, reviewed the threat of foreign influence and the effectiveness of its coordination and outreach. As a result of the  review, it further expanded the scope to widened its aperture to confront malign foreign operations of the PRC, Iran, and other global adversaries. Conspicuously  absent  from Wray's statement was the role the FBI and the 17 Intelligence Agencies played in the handling of the Russian Dossier Hoax.  Wray added The FBI will continue to investigate this threat leading up to the FY 2022 mid-term election and will not stop working with our partners to impose costs on adversaries who have or are seeking to influence or interfere in our elections" 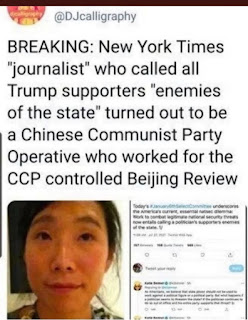 Wray did not mention that politicians promoting Defund the Police policies, inciting riots or soft-on-crime district attorneys played a role in the all time high crime sweeping the nation 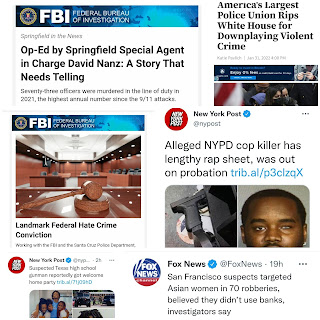 "Many of today’s gangs are sophisticated and well organized and use violence to control neighborhoods and boost their illegal money-making activities, which include robbery, drug and gun trafficking, fraud, extortion, and prostitution rings. These gangs do not limit their illegal activities to single jurisdictions or communities. The FBI is able to work across such lines, which is vital to the fight against violent crime in big cities and small towns across the nation. Every day, FBI special agents work in partnership with federal, state, local, and tribal officers and deputies on joint task forces and individual investigations. 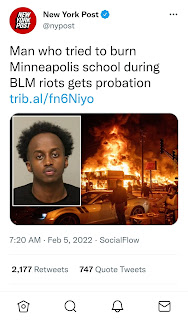 FBI’s work in Indian Country increased significantly due to the July 9, 2020, Supreme Court ruling in McGirt v. Oklahoma, and Wray appealed for additional resources as a result of the recent McGirt v. Oklahoma  - McGirt v. Oklahoma, 591 U.S.  (2020), was a landmark United States Supreme Court case which ruled that, as pertaining to the Major Crimes Act, much of the eastern portion of the state of Oklahoma remains as Native American lands of the prior Indian reservations of the Five Civilized Tribes, never disestablished by Congress as part of the Oklahoma Enabling Act of 1906. As such, prosecution of crimes by Native Americans on these lands falls into the jurisdiction of the tribal courts and federal judiciary under the Major Crimes Act, rather than Oklahoma's courts. In the wake of McGirt, Oklahoma state courts began reviewing and vacating past criminal cases heard at state courts involving Native Americans and transferred their overview to federal courts. However, this included crimes where the defendants were non-Native Americans but the victims were, which state government and law authorities believed was beyond the intent of the McGirt decision. In 2022 the Supreme Court ruled in Oklahoma v. Castro-Huerta that prosecution of non-Native Americans on tribal lands was jointly held by federal and the state. Wray did not discuss  How Progressive policies, Tribal Leaders & corrupt politicians have failed Native Americas & Alaska Natives

As for Transnational Organized Crime (TOC) Wray says that TOC groups increasingly exploit jurisdictional boundaries to conduct their criminal activities overseas. Furthermore, they are expanding their use of emerging technology to traffic illicit drugs and contraband across international borders and into the U.S.

Wray said that FBI’s ability to learn about and investigate child sexual exploitation is being threatened by the proliferation of sites online on the Darknet. Wray did not discuss how FBI agents disregarded allegations by Olympic gymnasts that they were sexually assaulted by former national team doctor Larry Nassar and later made false statements to cover their mistakes, Justice Department investigators said in a long-awaited report on the bureau’s handling of one of the biggest abuse cases in U.S. sports history. Or why Ghislaine Maxwell’s got [referential treatment by Judge Alison Nathan and brief sentence and why the FBI has not gone after Epstein’s Clients

As to civil rights, Wray said the FBI remains dedicated to protecting the cherished freedoms of all Americans. Civil rights crimes including color of law violations, hate crimes, Freedom of Access to Clinic Entrances (FACE) Act violations, voter suppression, and human trafficking.  Director Wray did not mention that most reports conclude that although completely accurate numbers are probably not available, researchers generally agree that among ethnic minority groups in the United States, Blacks are the most likely to experience domestic violence followed by Hispanics and then Whites. In 1965 25% of African American children were raised fatherless. Today is up to 75% and soon The African American nuclear family may join Sea Turtles on the most endangered species list 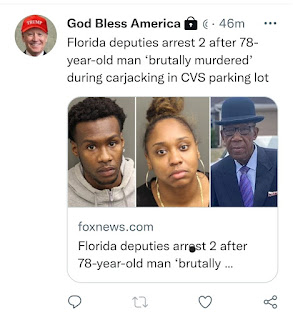 . In an earlier piece, we wrote “Appointing a Diversity Officer (such as the FBI’s first CDO) based on her color or sexual preference, or the FBI teaming up with the Girl Scouts, or even the FBI’s incessant press releases warning the nation about reporting hate crime may result in unintended consequences, such as hate crime hoaxes or promoting the LGBT lifestyle. 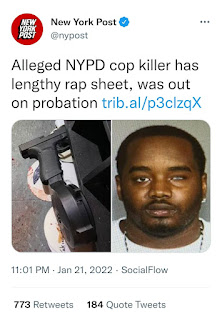 All these are cultural signs, where culture is used as a form of social control. If you do not like the culture or the signs or language that define that culture, you do not belong! That is not diversity! That is indoctrination.“  Wray did not say who, on a prorated basis, is more likely to commit hate crimes 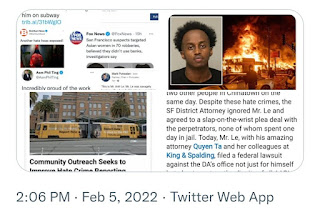 Director Wray also lobbied for additional tools in the area of "lawful access:" The problems caused by law enforcement agencies’ inability to access electronic evidence continue to grow. Increasingly, commercial device manufacturers have employed encryption in such a manner that only the device users can access the content of the devices. This is commonly referred to as “user-only-access” device encryption. Similarly, more and more communications service providers are designing their platforms and apps such that only the parties to the communication can access the content. This is generally known as “end-to-end” encryption. The proliferation of end-to-end and user-only-access encryption is a serious issue that increasingly limits law enforcement’s ability, even after obtaining a lawful warrant or court order, to access critical evidence and information needed to disrupt threats, protect the public, and bring perpetrators to justice. Wray did not discuss how The FBI conducted as many as 3.4 million searches of data in the U.S. without a warrant over the year 2021, according to the  Annual Statistical Transparency Report published by the Office of the Director of National Intelligence on Thursday and focuses on the intelligence community’s use of national security authorities for surveillance under U.S. law. The information was previously gathered by the National Security Agency, the U.S. military’s signals intelligence agency, but was transferred to the civilian-led FBI per the U.S.A. FREEDOM Act, passed in 2015.

What Are Y'all Doing?': Cruz Scorches FBI Director for Targeting Patriotic Symbols

In Thursday's Senate Judiciary Committee hearing with FBI Director Christopher Wray, Texas Republican Senator Ted Cruz took Wray to task for the Biden administration's politicization of the Bureau that's been turned into a weapon against conservatives while ignoring leftist violence — and Cruz pulled out all the stops