If you dont work, you dont eat. Restrictions Apply!

2000 years ago, the Apostle Paul warned the Thessalonians: "if you don't work, don't eat. (2 Thes 3:7) using himself as a model" where he refused freebies even when justified "you know how one must imitate us.
For we did not act in a disorderly way among you,
nor did we eat food received free from anyone.
On the contrary, in toil and drudgery, night and day
we worked, so as not to burden any of you.
Not that we do not have the right.
Rather, we wanted to present ourselves as a model for you,
so that you might imitate us."  The Apostle Paul then goes on to describe those who should mind their own business and work: "In fact, when we were with you,
we instructed you that if anyone was unwilling to work,
neither should that one eat.
We hear that some are conducting themselves among you in a
disorderly way,
by not keeping busy but minding the business of others.
Such people we instruct and urge in the Lord Jesus Christ to work quietly
and to eat their own food"

To be sure, the Apostle Paul's message was intended for able-bodied individuals.  A private sector safety net was available for the widowed, orphaned, infirm and elderly, much more effective than any government safety net. For instance, those, who argue against Voter ID claim racism, that  requirement places a huge burden on the disadvantaged, including seniors and the infirm - the ones dependent on the government's safety net.  The same argument is used for voter- by- mail

Yet, the same disadvantaged individuals needing government assistance must jump through hoops to get it.

As long as the claimant is dealing with the government and if  the claimant is not  well connected, it's like pulling teeth. This applies to any claim:
#FoodStamps, #VeteranBenefits. #NativeAmericanBenefits, #SeniorExemptions and so on.

#Netflix's #TheMaid provides a glimpse at the challenges people face when looking for government assistance: For the average Food Stamps claimant, getting a #VoterID  card  is exponentially easier than getting an  #EBT card - it's all politic 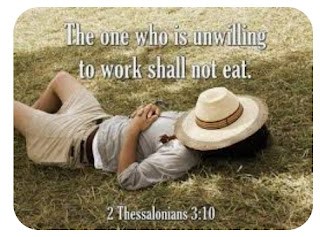 We have been told about the importance of work ethic and  that hard work is intrinsically virtuous and worthy of reward. It's also worthy of admiration  and emulation ubiquitous in the greatest generation, my father included.
A workplace with strong work ethics is productive and efficient. Employees in such a workplace are more likely to be successful and satisfied with their jobs.


"House Republicans have historically cited the verse — “if a man will not work, he shall not eat” — as justification fIor cutting some adults’ SNAP benefits. Arrington referenced the verse in a discussion about increasing the work requirements for unemployed adults on the food stamp program. But critics say that advances a pernicious myth about the unemployed who receive SNAP"

Our own generation is  reminded of the consequences when virtue is dismissed as an inconvenient artifact, when SCOTUS (1963, Abington Township v. Schempp)
decided that teaching children about wisdom, understanding, counsel, fortitude, knowledge, piety,  fear of the Lord., charity, joy, peace, patience, kindness, goodness, generosity, gentleness, faithfulness, modesty, self-control, and chastity was too radical.  As Bishop Robert Barron might say "
What mattered far more to authors from Aristotle to Aquinas is the virtue with which power is wielded and the moral purpose which it serves."

Little wonder student debt stands at $1 7 trillion - and politicians and  financially illiterate students -  those who spent time and money on worthless degrees, want the taxpayers to assume that debt. 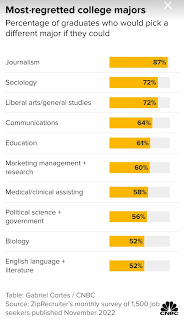 In 1965 25% of African American  children  were raised fatherless.  Now that number jumped to 75%. Children from fatherless homes are more likely to be poor, become involved in drug and alcohol abuse, drop out of school, and suffer from health and emotional problems


Then there are folks like Antonio Pagliarulo, whi joins #WaPo, #NYT et al - to promote Witchcraft "I am one of a million-plus Americans who — whether proudly, secretly or dabbling through the power of consumerism — practice some form of witchcraft. Witchcraft, which includes Wicca, paganism, folk magic and other New Age traditions, is one of the fastest-growing spiritual paths in America"


We also have children confused as to which bathrooms to use- Dr. #ChristyOlezeski, who co-founded the #Yale Pediatric Gender Program, says she helps treat three year olds questioning their gender and also provides guidance on “medical intervention.”

After 2000 years the Apostle Paul's advice is timeless.  C. S. Lewis said "Education without values, as useful as it is, seems rather to make man a more clever devil." While NCCS writes "As a member of Arizona's Standards Committee for Social Studies I was anxious to get some meaningful standards in place relating to an understanding of our roots. We were successful. Two of these requirements are that students must be able to identify fundamental principles in the Declaration of Independence and also be able to explain American moral and ethical ideals which have their antecedent in the Judeo-Christian tradition