MIT Review's Chris Stokel-Walker cites BotSentinel  estimates that suggest that more than 875,000 users deactivated their accounts between October 27 and November 1, while half a million more were suspended. 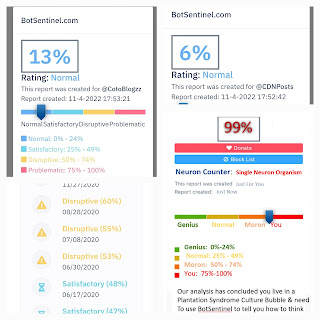 You may recall that thanks to a lawsuit brought by celebrated journalist John Stossel, it "has exposed the left’s supposed battle against  “misinformation” as a farce" according to NY Post's editorial board. "Facebook finally admitted the truth: The “fact checks” that social media use to police w9Khat Americans read and watch are just “opinion.”" it stated. BotSentinel may be just another social media fact-checker.

From the outset of the pandemic, the mainstream medical establishment,  government bureaucracy, MSM & Big Tech
were aligned behind a lockdown-at-all-costs strategy going as far as censoring contrarian views, including mine.

An analogous narrative developed surrounding the integrity of the 2020 elections, with Fox News' Tucker Carlson going on record as saying he found ZERO evidence of voter fraud.

Critics of the CotoBuzz Journal Tweets, instead of rational rebuttal, often labeled them as conspiracy theories misinformation or resorted to use BotSentinel "findings" showing the posts in the 60-90%  or "problematic" to conclude I must be a bot or trade in misinformation. Twitter itself shadowbanned The CotoBuzz Journal and censored some of the posts: all which are fact-based
The current BotSentinel ranking for the CotoBuzz Journal Tweets show it as normal.  However. Its "history"  clearly shows posts leading up to the election & COVID were in the 50% range. While the history no longer shows the CotoBuzz Journal Tweets as problematic, perhaps because the conspiracy theories have been shown to be factual.
Stokek-Walker describes the BitSentinel criteria as "Bouzy and Bot Sentinel arrived at their numbers by looking at the proportion of users they analyze who had deactivated their accounts or been suspended after Musk’s Twitter takeover, and then applying that percentage to Twitter’s overall user base, which currently stands at around 237 million “monetizable daily active users”. In business we say that whoever is in charge of the chart of accounts is in charge of the narrative.   In this case BotSentinel.
However; you may recall Elon Musk threatened to pull out of his $44 billion deal to buy Twitter unless the company provides access to data he says is necessary to evaluate the number of fake users on the platform. Surely BotSentinel lacks this data.
Based on my previous reporting, I will call any BotSentinel estimates as problematic and more so when MIT gives it credibility.  For comparison purposes I have included BotSentinel rankings for Conservative Daily News Tweeter postd - a media outlet LinkedId users have characterized as "purveyors of red meat for ignorant people." To my surprise, BotSentinel ranked CDN as "more normal" than the CotoBuzz Journal!
I will also conclude the million plus users Twitter has lost since Elon Musk tool over must be either bots or the prolific Twitter users Pew Research characterizes as purveyors of misinformation
Posted by JLA at 8:43 PM