The MSM was enraptured by the creativity Democrats displayed during the 2022 midterms. CNN called it the "Cynical Strategy"
Where a Cynical Strategy can consist in believing that people are motivated by self-interest; distrustful of human sincerity or integrity and or concerned only with one's own interests and typically disregarding accepted or appropriate standards in order to achieve them. 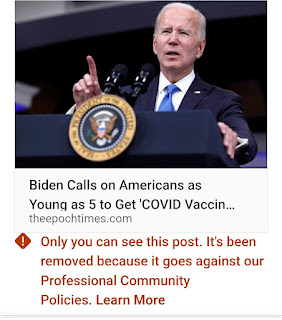 All consistent with a 2009 study by Jonathan Haidt where he
concluded that Liberals were willing to betray group loyalty, disrespect authority or do something disgusting, like #votetfraud, while conservatives said they were less willing to compromise on any of the moral categories shown.

Earlier I noted that my days using  LinkedIn were numbered due to its inconsistent enforcement of community standards. Big Tech
promised to democratize the world by offering free #Internet. But it quickly carved out silos. The bigger the Silo, the more advertising money.

While 230 reform is a possible solution to online censorship, you may recall that the GOP overrode Trump's Defense Bill veto giving Big Tech power to do as they please - now GOP whine because they are being canceled one at a time. Unless one  enjoys the Silo living, an euphemism for  intellectual in Breeding, the best option for a social media that promotes freedom of expression is for Elon Musk to transform Twitter.  Otherwise the Big Tech-enabled online cynical strategies will continue to thrive.
Ironically, while LinkedIn calls itself the Connector, the same content published I the mainstream social media platforms, is regularly censored, leading an impartial Observer to conclude that LinkedIn is really the AntiAmerica ( like Joan-Francois Le Drian), ProChina, AntiSemitic, AntiBlack, AntiAmerica First. Progressive (AntiChristian, ProBLM, ProAbortion. ProBig Pharma, ProTeachers Union, ProGreen New Deal) Connector.
It seems the LinkedIn  censors rely on user-complaints and not necessarily algorithmic, lending itself quite nicely to manufacturing opportunities for the exploitation of cynical strategies, analogous to the Maricopa County election process.
I have challenged the over a dozen of posts censored by LinkedIn, all fact-based. About half of the challenged posts have been reversed. All of them have taken hours or days to respond.

Today I reported an obviously cynical strategy used by an obvious fake Doug Newell account. Within minutes, LinkedIn determine Newell was not fake!


Cynical Strategies are not illigal. And that is the point. Promoting the Russian Hoax was not illigal. Now
Democrats sue for Saturday voting in Georgia Senate runoff.  "Senator Warnock and his Democratic Party allies are seeking to change Georgia law right before an election based on their political preferences. Instead of muddying the water and pressuring counties to ignore Georgia law, Senator Warnock should be allowing county election officials to continue preparations for the upcoming runoff," said Secretary of State Brad Raffensperger

You may recall that the GOP refused to challenge the 2016 election results  despite evidence of voter fraud.  To date, the GOP refuses to  challenge Biden's Executive Orders.  But as soon as DeSantis signed the  election reform bill, Democrats sued.

While Democrats love to draw outside the lines with an assist from MSM and Big Tech, the GOP continues to draw inside the lines. Let the 2024 Cynical Games Begin!


Some Black users say their posts are stifled by the networking site. But while LinkedIn insists issues are due to an unfortunate mix of technical

An apparent censorship spree carried out on LinkedIn's China service has targeted journalists and researchers who have published works critical of Beijing.