Why is it  #Maricopa County AZ is still not fully counted or verified Maricopa County is the only jurisdiction in the country that picks up completed ballots at USPS Processing Distribution Center, but doesn’t bring them back to the election department or tabulation center. 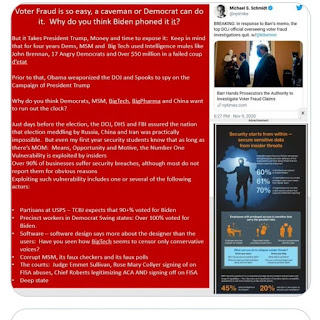 Maricopa County picks up mail-in ballots and takes them directly to its print vendor Runbeck Election Services, which is headquartered in Phoenix.

Every single completed mail-in ballot, whether mailed or dropped off at a polling place, goes to Runbeck. All mail-in ballots collected on election day, and the previous few days, are sitting at Runbeck headquarters. Maricopa has no idea how many ballots are in their possession because the ballots are at their print vendor.

Maricopa allegedly uses Runbeck because they have “high-speed scanners.” Runbeck scans the ballots in batches to create a digital image of each envelope signature area. This batch of images is given to the Maricopa tabulation center (MCTEC) for poll worker review. MCTEC notifies Runbeck if any of those signatures don’t match. Runbeck separates out those bad envelopes, then delivers both sets of these envelopes by van to MCTEC, which is 6 miles away. MCTEC then opens the envelopes and starts the tabulation process.

Mr. Brian Runbeck brother, and executive of Runbeck, to owner Kevin Runbeck, also made 50 separate donations to Act Blue, Biden for President and the Democratic Senatorial Campaign Committee between August 15 and October 30, 2020

To a naked eye, this process is questionable: Chain of custody. No observers. Partisan owned company has sole possession of the mail in ballot for 10-12 days.

Consider that a security professionals worse nightmare is the Inside Threat.  Insiders with Motive have MOM - Motive, Opportunity & Means to commit any crime, including #VoterFraud.  In Maricopa, someone could  always print up some completed ballots and slip them in the mix. As reported in 2020 many alleged mail in ballots had no fold markings.

Why Maricopa is Exhilbit A- Parasitic Bureaucracy:

Someone said he didn't care about speed, but accuracy & honesty.  Giving Maricopa the benefit of the doubt, since in
general, it's better to be effective than efficient.

Yet  a bunch of bureaucrats run the process as their own board game, run out of paper, while counters and printers fail - on election night.  This is like running out of toilet paper at the worst possible moment:

Turns out,
#Electionintegrity is a function of the entire voting process, from mail in, voter  ID, Voter Registration Lists,  hardware, software & so on.

The Biggest Threat? The Inside Threat

At the very least, Maricopa is creati g opportunities for Threat Actors

https://www.reuters.com/technology/exclusive-russian-software-disguised-american-finds-its-way-into-us-army-cdc-2022-11-14/
Posted by JLA at 9:34 AM