Since 1981, National Crime Victims’ Rights Week is celebrated every year in April. This week is dedicated to learn about victimization, the effect victimization has on individuals, families, friends and the community, and to promote laws, policies, and programs to help victims of crime.  Every year, thousands of communities across the nation honor the dedication of those before us that established victim rights and renew commitment to guarantee that all victims have the rights and services they need to recover from crime.  This year NCVRW is observed April 24-30.  Victim Support Services participates in marches, tree-planting ceremonies, and many other activities that are held each year to promote victims’ rights and to honor crime victims and those who advocate on their behalf. A much better way to honor the victims is to make sure the crime does not happen in the first place 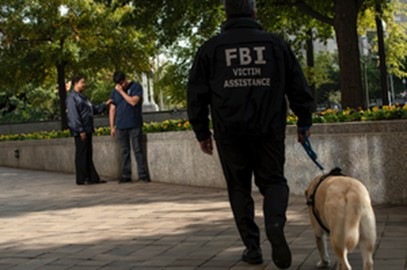 The FBI’s Victim Services Division (VSD) informs, supports, and assists victims in navigating the aftermath of crime and the criminal justice process. There are 94 full-time VSD staff at headquarters, who manage the day-to-day operational aspects of the Victim Assistance Program across the FBI’s 56 field offices and international offices. Across the field, there are 172 victim specialists and 21 child/adolescent forensic interviewers, all providing assistance across numerous case types, including violent crimes against children, Indian Country, human trafficking, bank robberies, identity theft, and so on.  According to a FBI Las Vegas press release dated April 29, 2022, even when perpetrators of crimes are brought to justice, the cases do not end. Our victim specialists work to provide each individual with various emotional support, services, and resources to assist during and after their cases.

The FBI also has a multi-disciplinary team called the Victim Services Response Team, consisting of agents, analysts, and victim specialists that provide operational support in crisis and mass casualty events and play key role in supporting victim/family crisis assistance for state and local agencies following active shooter and other crisis incidents.  Specific to the Las Vegas Field Fffice, it has two victim specialists within the state, one in both southern and northern Nevada.

The importance of celebrating National Crime Rights Week cannot be denied. However, as the celebration focuses on " the effect victimization has on individuals, families, friends and the community, and to promote laws, policies, and programs to help victims of crime." the evidence shows that the battle has been unmitigated failure.  For example, last week, United States Attorney Roger B. Handberg announced  the first quarter results of the Middle District of Florida’s Project Safe Neighborhoods (PSN) strategy as the FBI statistics show a 30% increase in violent crime in 2020 compared to the previous year. This is heartbreaking. For years, America had been experiencing steadily falling crime rates. But now, our country is heading back to a level of urban criminality not witnessed since the early 1990s.

A business axiom says "don't ask for data you won't use. Yet All 56 FBI field offices regularly run "report hate crime announcements. Its own Hate Crime Statistics Report show who is more likely to commit a hate crime. It shows that parents who show up at school board meetings to defend parental rights,  are not likely to be terrorists.  It knows which public officials spew hate and  call for violence. It knows that Soros-backed prosecutors and district attorneys are way too soft on crime. For example: Mr Anh Le was savagely beaten with a bat by two people in Chinatown, but despite the high hate crime rate in the city, San Francisco DA plea-deal so the  perpetrators did not get jail time - Mr Le had to sue to get justice. A much better way to honor the victims is to make sure the crime does not happen in the first place

If Mayor Giuliani was running law enforcement he would re-instate  Stop-And-Frisk - yes, we know it was ruled unconstitutional, which supports our argument.

According to a DOJ's Office of Public Affairs,  four officials from China’s Ministry of State Security (MSS) and another man, were char...