In remarks prepared April 27, 2022 for delivery to the Domestic Security Alliance Council, FBI Director Christopher Wray made it clear the counterintelligence threat posed by China is top of mind and " nothing presents a broader, more severe threat to our ideas, our innovation, and our economic security than the People’s Republic of China." according to Wray's remarks. The Domestic Security Alliance Council (DSAC) is a strategic partnership that formed in December 2005 between the U.S. government and the U.S. private industry, seeking to bridge the information divide between America’s private and public sectors. Or as Citizens For Truth's Jack Xiong, writes:  "DSAC, the Secret Alliance Between Corporations and the FBI to Monitor Activists"  Xiong writes that "The most high-profile case of DSAC’s work was revealed in 2012. Following successful freedom of information requests by the Partnership for Civil Justice Fund, the FBI releasedredacted documents in December 2012 showing that the FBI had spied on Occupy Wall Street (OWS) organizers and passed OWS information to financial firms via DSAC before the first OWS protests in Zuccotti Park in New York City." 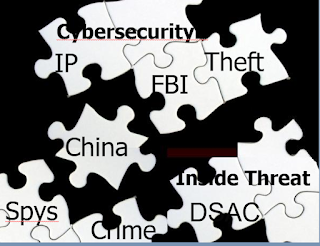 Wray asserts that the  PRC is leading a generational fight for China to surpass the U.S. as a global superpower, and it’s pursuing those goals with little regard for international norms and laws and  not through fair and lawful competition and that the Chinese government has shown its willingness to steal its way up the ladder, as the scale of China’s theft of U.S. innovation is unprecedented. And as a result, U.S. companies are facing a greater, more complex danger than they have ever faced before.

To illustrate the extent of the Chinese threat, Wray says that of the 56 field offices the FBI has across the country, every single one has cases on the Chinese government’s attempts to steal U.S.-based information and technology,  use intelligence officers, hackers, front companies, seemingly benign joint ventures or research partnerships  and recruiting employees who use their legitimate access to steal corporate secrets, what we all refer to as “insider threats.”  This is breaking news:  While we have been urging the FBI to address the insidious Inside Threat for years, this is the first time we see Director Wray discuss it.  The Inside Threat was conspicuously absent in the FBI 2021 Internet Crime, for instance, even though   Rachel Rojas, heads up the Bureau’s Insider Threat Office. To be cleat, we are not talking about the case where the DOJ dispatched the FBI to school board meetings to reign in parents who protested against schools overreach 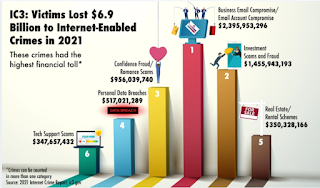 Director Wray's remarks describe in detail the case of Shan Shi, who sentenced to federal prison in 2020 for stealing trade secrets from a company in Texas regarding a technology called syntactic foam, export-controlled because it has military applications that allows submarines to evade detection underwater. This technology,  China’s government agencies and state-owned enterprises hadn’t been able to manufacture themselves. So to get around it, the Chinese government gave Shi three million dollars to incorporate a company in Houston and get what they needed to make syntactic foam in China. To obtain the technology, he targeted the American victim company’s employees on social media using cash incentives and cushy job offers to entice two former employees, two former insiders, to help with this effort in exchange for the company’s trade secrets and technical data.Once he had the information, Shi sent it to China, where they started manufacturing a key component of syntactic foam.

To add insult to injury, Shi and his co-conspirators patented in China the very manufacturing process they stole from the American company. Shi then contacted the victim company and offered it a joint venture using its own stolen technology with the idea of  obtaining the company’s cooperatio and then put it out of business. While the  Chinese government could not replicate the technology, it paid to have it stolen.  The victim company’s CEO fully cooperated with the FBI resulting in indictments and arrests and the FBI was able to disrupted a planned purchase of millions of dollars’ worth of manufacturing equipment destined for China. Four defendants, including the two insiders pleaded guilty. Shi was convicted at trial and the Chinese government’s attempts to dominate that particular industry were thwarted.

Besides the Insider Threat describe in Wray's remarks, the also addressed cyberthreats, as staying near the top of the FBI's  list as long as nation-states and cybercriminal syndicates keep innovating. According to the remarks.  Like any security threat, it is a cat and mouse game:  The Chinese government is constantly developing new ways to compromise victims' networks. Today’s cyber threats are more pervasive, hit a wider variety of victims, and carry the potential for greater damage than ever before.  The rest of Director Wray's remarks were a general overview of  the FBI 2021 Internet Crime Report and extoling the virtue of partnerships such as the one with Domestic Security Alliance Council, which the Partnership for Civil Justice Fund, a non-profit, said that espionage facilitated by DSAC treated “protests against the corporate and banking structure of America as potential criminal and terrorist activity,” and said that DSAC was “functioning as a de facto intelligence arm of Wall Street and corporate America.”